Spam
I've blocked this number but they call multiple times per day, one call right after the other. I answered one call, no one said anything so I hung up. They keep on calling.
Reported Caller Name: U******

Spam
This number calls about 6 times a day saying my Google business needs to be updated. I have no such business.

Spam
They call at least 6 or more times daily, blocked but shows up and it my cell, they don't stop. Nightmare
Reported Caller Name: N* C***

Spam
Call center from Lynwood, Washington State. Receivables collection company. Insisted on talking to my spouse about a “private matter”. Would give no details due to the “privacy” involved. Ignored multiple questions.

Spam
Calling at all hours of the day, nite and day. I’m tried of them, asked them to stop calling but still calling.

Spam
This stupid number calls literally 6-8 times a day without fail. It's been going on for a couple of months now. I've blocked them but I still get notifications each time they call. I wish I knew how to block them 100% for good.

Spam
Contacted 8 times in 6 hours.. 2 was back to back. I answered the first call they asked for someone I did not know I told them wrong number. They proceed to call back 7 more times with in the 6 hours each time i answered to tell them to stop calling. No one would say hello even waited 5 mins on the last call still no one on the phone. Reporting
Reported Caller Name: N/A

Spam
Calls 2-3 times a day every day without fail. Extremely annoying no clue how the number hasn't been deactivated yet.
Reported Caller Name: U******

Safe
Calls very early i work late this wakes me i always leave phone out in office area still i hear it three times un early morn then three or so times during day dont keep phone on me yet always gave theur missed calls text them once to tell them i wont answer cause dont know em so STOP CALLIN!! Just git anither call from them 20 mins about

Spam
They call every single day you'll see my line to talk to someone else. They do it 1 or 3 times a day every single day. And I hope this stop they already. I put this number on the rejected list but they keep calling no matter what.
Reported Caller Name: S******

Spam
Called every day for a week, I don’t live in Washington, or even know anyone that does. Most likely spam.

Spam
Clearly they've found/purchased some information about a company I own. They try to get information from you to "collect a debt." Scammers, DO NOT SHARE INFORMATION!!

Spam
This number calls multiple times a day and has been for weeks. Its a Washington number, and I live in Toronto Canada and don't know why these clowns are calling me. They don't leave voicemails, so I blocked the number a week ago yet they keep calling multiple times a day. I'm guessing that it's some sort of autodialer, and most definitely spam. My cellphone even shows the number as suspected spam/scammers. Do yourself a favor and block them. I called once out of curiosity, nobody answered, was on hold for a minute, then tranaferred automatically, again nobody answered and i ended up getting a voicemail that i planned telling to f*ck off, but the inbox was full lol. F*ck these c0cksuckers whoever they are.
Reported Caller Name: U******

Spam
Calls 3 times a day and won't leave message. One time I answered with my company logo and they hung up.

Spam
Receive 2-3 calls a day. They are missed calls and no message. I don't know anyone in WA.
Reported Caller Name: N* N***

Spam
Calls me constantly. Won't leave a message so I haven't answered. I only know a few people in Washington and none of them have my number. I'm assuming it's some sort of spam, especially after reading these other posts.

Spam
repeat calls approx 3 times per day - will not leave a message. 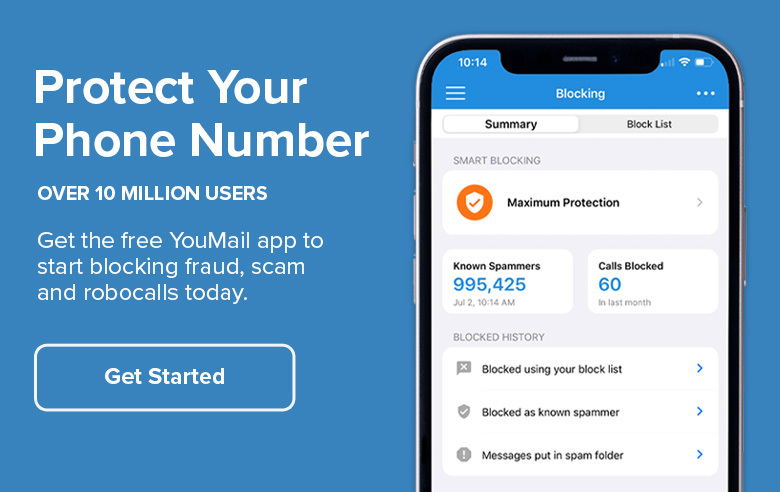 A very professional interface it is as though I have a secretary taking my calls for me
An Android User
I love youmail but the app is not that good. I have been using youmail for a long time and really love everything about it but the app I am not that happy with. The app freezes constantly and load. I have delete it and re-install it at least once a week. I wish it worked better.
capenner
Best application ever. Really useful to help identify unknown callers
writetokarla